The Hindu Newspaper dated 6th May 2010 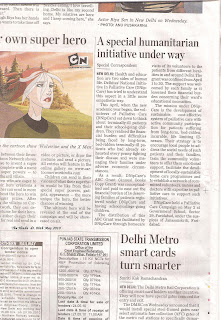 Health and Education are two sides of the coin of human life. DNipCare tried to understand this aspect in a little more empathetic way. The academic session for every school/college going student begins in the month of April. Every parent is busy in getting new uniforms and books to their children going to their new classes. The volunteers of DNipCare were also following the same way before they were into this Palliative Care.
But this April 2010, the volunteers sat to ponder over about the patients and their school going children and so decided to act differently. They realized the financial burden and difficulties being faced by each and every long term, bed ridden terminally ill patients who are already exhausted every penny fighting their disease and managing their families under adverse economic circumstances. As a result, DNipCare’s ABC Grant (Annual Books Copy Grant) was conceptualized and paid to ease out the financial burden of 14 deserving families of patients registered under DNipCare and having school/ college going children. The distribution of this ABC Grant to the patients under its roll was facilitated by DNipCare through homecare visits of its volunteers to the residences of all ailing patients on different localities in and around Delhi. The Grant was confined to the period of 1st to 30th April 2010 only. Looking back, the volunteers feel very much satisfied on their efforts of reaching this much needed timely support to the patients they care.
The support was welcomed by each patient and their families wholeheartedly as they got the grant unexpectedly and it lessened their financial imbroglio substantially for their wards educational necessities. DNipCare hopes to resume this kind of educational support to the children of Palliative patients through the respective school authorites of these students in the next year.

In continuation to its Palliative Care awareness generation Program, DNipCare held a Palliative Care Campaign at 5.00 PM on 2nd May 2010 in Government School, Sector 29, Faridabad under the auspices of Janasanskriti, Faridabad. The program was held by a team of Palliative volunteers led by A.T.Sainudin, President DNipCare, Dr. Anjay B, a Palliative Care expert, Sumitha, K.V.Hamza, Antony Cyriac and Ajith Kumar. Cancer – Prevention and Early Detection and Palliative Care was the topic of the campaign.
KV Hamza,
General Secretary 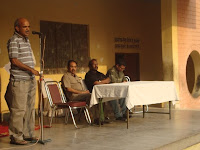 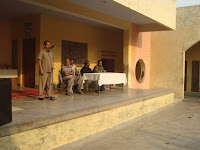 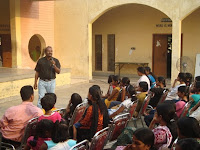 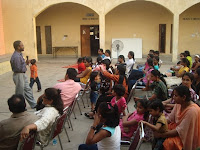 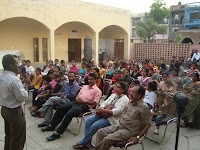 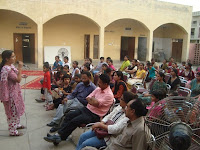 Posted by DNipCare at 8:54 PM No comments:

It was a holiday for all of us due to Good Friday. First priority on such holidays for us now is to venture out for visiting patients under Palliative Care program.

Madhu guessed the fair of cycle rickshaw from GTB Nagar to Buradi and Jaroda, to be around fifty rupees. Hamzakka asked one rickshaw puller while confirming Madhu’s statement as he asked for seventy. We dropped the idea of cycle rikshaw ride under the scorching sun then and there.

A vendor who sells belpuri directed us to opt for phat phat sewa jeep services to Jaroda as the DTC bus service is rare to that place. Madhu didn’t wait; occupied one central seat of the first available vehicle there. We also managed to get side seat and made Madhu as our chairman. With small jokes and discussions we reached our destination at Jaroda Part- 2. We had to walk little further to reach our destination and finally saw the Ra… Nivas, where our patient *Niranjay stays. The DNipCare team also met Mr Dominique, our volunteer and resident of Burari, who acted as our guide over phone to reach the location.

We stepped into second floor of the building. There, we saw one girl at her early twenties lying on the floor, with a very tired look on her face and nauseating. Among the four siblings she is the eldest sister of Niranjay and she is Ms Nirmala. We told her younger sister to give ORS for her to get rid of her weakness and lack of water in her body. Even after, the situation remains unchanged as she started vomiting again. Our Palliative team members decided to wait outside their room for a while so that the sick girl could get back to normalcy.

When we were back in their room after 20 minutes, the girl seemed to be refreshed herself a bit and started describing the saga of their melancholic life wherein she has to take care of three ailing members of her family. Her two younger sisters were going for menial job of packaging goods in dingy factory set up in the colony earning a meager sum of Rs.1500/- per month per head. So the lives of all the seven members of this Srivastava family were solely dependent on the amount remains in hand after payment of monthly rent of Rs.1500/- for their accommodation to the landlord. To add to their downfall even this job is now denied to one among the two sisters as she had been on leave for two days nursing their sick and paralyzed mother in hospital.

Their concerns and difficulties to meet both ends together were though not explicitly expressed, clearly understandable from the conversation. The expenses on treatment of all the three patients in the family were, as the saying goes, adding insult to injury. The worst shock in their life was on diagnosing Niranjay with blood cancer, cost of medicines and treatments for him. They told they couldn’t buy the complete dose of medicines prescribed for two weeks by AIIMS as it costs about twenty thousand rupees. We slowly felt the gravity of their pain, which they face in their life. The father, who used to do loading and unloading job in Delhi, has now developed heart problems and unable to even lift a bucketful of water.

Hamza(kka) asked about their studies and about their place where they born and brought up. Nirmala explained that difficult situation with a painful note. They had been compelled to leave their livelihood in Jharkhand and decided to reach Delhi in 2008 looking for treatment of their mother for paralysis. In the meantime her brother also fell ill due to blood cancer. Sooner their father was also detected with blocked heart valves. The series of adversity loomed over their family resulting their getting into deep depression. Now the family with seven members stands in an intricate situation with three of them constantly requiring medical and personal attention.

Niranjay, the slender youth of twenty-three years, wearing a sleeve less banian and holding a forlorn look on his face is well aware of the disease, blood cancer, he is suffering from. All the hopes and ambitions in his life carried throughout, being the eldest son of the family have been fade away now.

We enquired about the present treatment of Niranjay and understood that his immediate requirement is blood due to less HB count. Dominique, one of our volunteers immediately expressed his willingness to accompany Niranjay to AIIMs on the next day to donate his blood. It is also found that though the family now lives a life of the poorest of the poor, it doesn’t have a BPL card nor had any voter ID proof or any thing of that sort to establish their residency in Delhi and weak economic status for availing any benefits from Government.

Madhu, while checking their reports enquired about their breakfast and that unveiled another worry they carry in their life that they are often deprived of even a single time meal a day due to poverty. Though they didn’t say any thing directly, Madhu could assess and and confirm while counseling Niranjay alone outside their home that they haven’t had food for the past three days at all. That was the most painful thing to hear for not only him but all our team members.

After a while we told the family that we would reach back within a few minutes, as we had to take photocopies of the latest prescription and reports of Niranjay’s treatment. Our intention was to bring some immediate basic food ration to the family so that the family could withstand at least another fifteen days. Realizing the severity of the situation we bought and gave the food ration to this hapless family from a nearby shop. The moment felt so profound for them as they are not used to getting any such kind of intervention from anybody so far and we could see it their eyes filled with a sign of respite. We the volunteers under DNipCare were also feeling a little satisfied for the moment. But we were also quite aware of the long road ahead where we have to intervene regularly to ease out the difficulties and provide whatever possible comfort to the patient and his family....

By DNipCare team: (Ajith Kumar, Madhu, Domique Savio & KV Hamza)
*Name of the patient/family changed to hide their identity
Posted by DNipCare at 4:58 AM No comments:

Sensitization campaign on ‘Early detection and prevention of Cancer’& ‘Palliative Care’
DNipCare, along with rendering Palliative Care, has also been conducting sensitization campaigns for different groups like Residents Welfare Associations, Students, Social and Cultural organizations etc., whereby people could be motivated to ponder over the gravity of issues being faced by each long term, bed ridden terminally ill patient and to strive for mitigating their pain to the possible extent with the concerted efforts of all.

In continuation to this, we have organized a sensitization campaign on ‘Early detection and prevention of Cancer & Palliative Care’ in association with the Residents welfare Association, Kendriya Vihar from 6.00 to 8.30PM on Sunday, 18th April 2010 in Community Centre, Kendriya Vihar, Sector 51, NOIDA. The program was conducted by a multidisciplinary team of volunteers and eminent doctors including Dr. Anjay B., Dr. Naeem Mansoor, Dr. Praveen Garg, Mr. AT Sainudin, President, Mr. Cyriac Antony, Mrs. Lekha Anil, Volunteers etc.,. 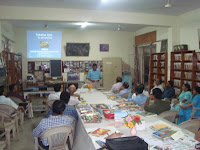 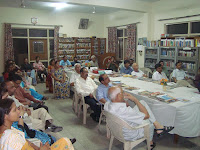 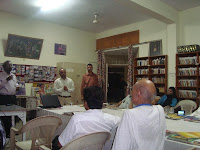 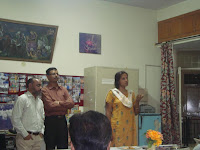 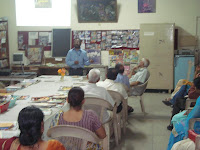 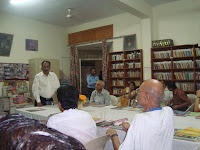 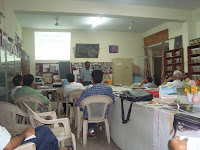 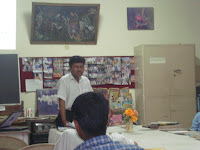 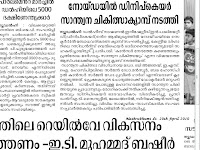 Further, DNipCare aims to disseminate Palliative Care discipline to all possible areas of Delhi and NCR so that every society / community shall become more concerned about the patients living with physical and emotional solitude in their vicinity, understand the problems and difficulties of their illnesses and build up neighborhood networks to address the issues of these hapless ailing patients.
With warm regards, 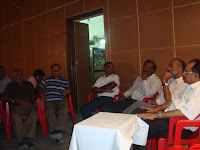 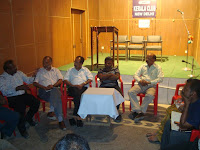 My dear Friends,
The Volunteer’s Monthly Review Meeting will be held at 6.00 PM on 10th April 2010 (Second Saturday) in Kerala Club, M 67 Connaught Place, New Delhi. Doctors with Palliative Care Expertise will be participating and leading discussions on home care, addressing psycho social issues of the patients etc. especially in the Delhi scenario.

You are requested to kindly attend the meeting.
With warm regards,
(k.v. hamza)
General Secretary, DNipCare
9891008356 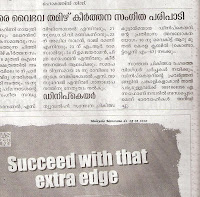 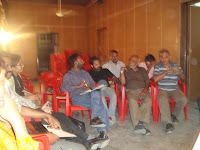