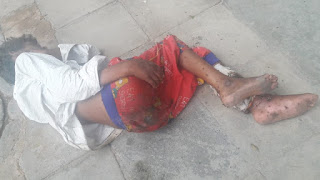 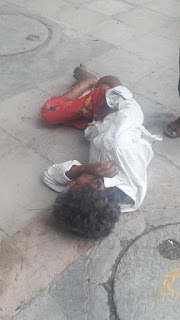 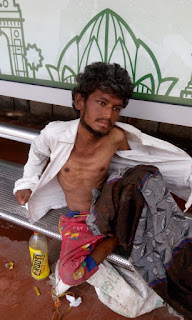 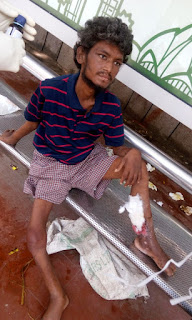 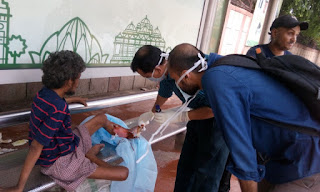 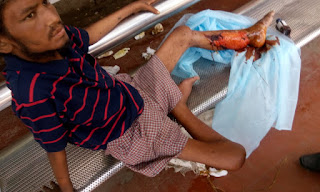 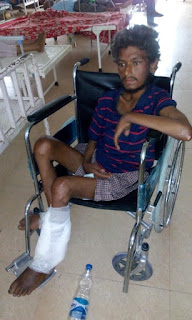 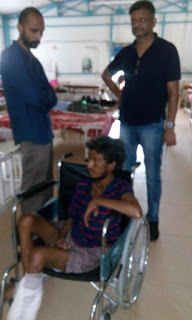 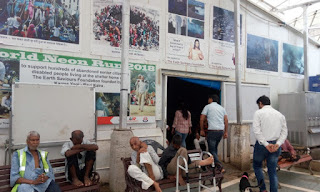 It was a frantic call from Dr. Shihla Shireen, the young lady doctor working in Dr.RML Hospital and volunteers for DNipCare, that led us, Seema Prasad and I, to Mr. Monu, a 21 years old chronic patient on Saturday.  Monu was lying in filth on the roadside pavement near bus shelter opposite to Shivaji Stadium in the heart of Delhi despite the alternating scorching sunlight and occasional heavy and light rains.  Countless flies surrounding him having a gala day with the large wound infected by maggots on his left leg below knee together with the soiled clothes of faeces emanating a stench in the entire bus shelter.
Though unable to either walk or even stand on his own due to the size of wound and resulting inflammation on his both legs he could coherently talk about his whereabouts.  Belonging to Nepal, he used to live in Sewa Nagar, Delhi with his elder and younger uncles as mother is in the remote village on the other side of Sariswa river, but nobody cared and so he was out in the streets under the sun looking desperately for some medical care.   Got his wound dressed up once in the NDMC Clinic nearby, thereafter, unable to walk he was completely confined to this bus shelter.

With the added up strength of Suresh Thaliyaril, Arun Unnikrishnan, Sivanandam, the volunteers of DNipCare, Sunday was our mission day of rescuing Monu from his apathetic conditions Delhi’s people endowed to him with their non-reactive, non-responsive attitude.  We could, bearing the pungent smell and wading through the invading army of flies, clean him up from the filth and muck, get new dresses and dressing up his wounds appropriately transforming him altogether by 2 hours concerted efforts.

In the meantime, we had contacted a number of organizations requesting to provide a shelter to save him from the adverse climatic conditions, finally zeroed in on Earth Saviours Foundation Gurukul, Bandwari Village, Gurgaon Faridabad Road headed by Shri Ravi Kalra, who was kind enough to agree to admit this hapless patient. Suresh Sir had to join duty at 2 PM and so Shivanandam Sir and Arun Unnikrishnan accompanied the patient to the rehabilitation centre at a distance of over 40 kms in our DNipCare vehicle, ofcourse driven by me.

Hundreds of destitute patients with variety of illnesses living together under the shade and security of the Gurukul is really a satisfying scene of true human care which even the Governments are hardly able to provide to the unfortunate mortals.  We could admit him in Gurukul around 4 PM thereby ensuring a secured stay with a roof over his head, adequate food to eat and necessary medical attention which were not available even in his remotest dreams while staying under the bus shelter.

An after thought: We could manage for one Monu only now, but what about hundreds and thousands of such hapless destitute patients on the pavements in the lengths and breadths of our great Country ?  Another team initiating action, if not for completely rehabilitating, at the least informing the adjacent police post to intervene and drop the patient in the emergency of the nearby hospital can be some solace and comfort by preventing maggot attacks on their open wounds and reducing pain and sufferings.