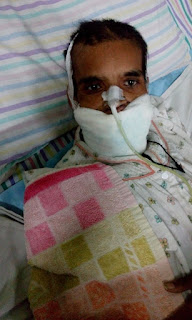 ‘We all are with you and I am there as your elder brother to take care of you’.  That was a promise made to her on meeting Asmin on 26th June 2018 when visited her with Mansha Bagai in Shanti Avedna Sadan.  Asmin was brought by Police and admitted in the Sadan on becoming a destitute Oral Cancer Patient in GTB Hospital consequent on her husband reported to have deserted her.  She was with full of anger and frustration towards her husband and feeling thoroughly depressed on not being able to see her 5 children the youngest 3 years old boy.  Ofcourse it was the kind of a different story altogether on the next day as her husband either on the pressure from Police or on his own turned up to meet her and both of them were crying together.  That melted the ice to a happy ending only and I posted on wondering about the tremendous capacity and large heartedness of women to forgive and forget the gravest acts of their better halves.

Just one month passed Asmin spending the time in the hospice centre comfortably despite her precariously large wound on her cheek, receiving the best attention and care from the doctors and loving sisters of Shanti Avedna Sadan, completed her 32 years life in this world at 2.30 pm on 24th July 2018. Getting the information, her husband also reached there after 3 hours and was mulling the ways as he had neither any other family member with him nor the resources for her last rites.  As always C Antony Baby, Abdul Kareem, Zubair, Althaf and 4 member ladies team led by Saliha Habeebul Rahman, our DNipCare volunteers arrived to support Mr. Zahid Ali, Asmin’s husband and his friend in this time of real crisis.  By the time they prepared the body after bathing for funeral prayer and burial it was almost 8.30 PM and we had already requested the authorities to dig the grave in Lodhi Road graveyard and started straight to there.

Unfortunately either the ambulance driver or the team came from Delhi Malayali Halqa were not well conversant with the Delhi roads, they got lost in the way and reached well beyond Nehru place instead of Lodhi Road where Kareem Sir reached followed by me, waited well upto 10 PM before the body in ambulance reach there.  Our silent prayer to God was to avoid rain till completion of the burial.  The graveyard with large number of trees including many thorny plants and shrubs was even preventing the full moon light to enter and there was no other light arrangement except depending on our mobile torch lights to take the body pall bearing up to the grave evading the thorns, the patches of water logging and treading on graves on the way.

With the concerted efforts, finally we could finish the task by 11 PM only and were really wondering the patience of the lady volunteers came all the way up to the grave yard and waited leaving their children at home almost upto midnight, still thanking for giving an opportunity to them for participating to support the last journey of a hapless patient.  Kudos to all stood with us and supported in our efforts.

Yes, diligently discharged the duty of keeping up the promise made to Asmin that ‘we all are with you and will take care of you as an elder brother’.