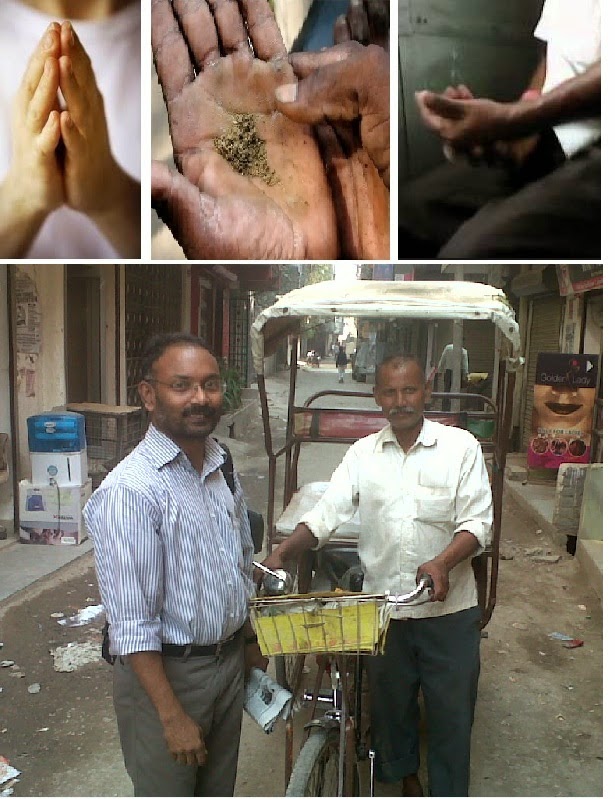 Greeting people with folded hands and saying Namaste is the age old tradition of Indians.  But of late there is a variation also and the addition is tobacco’s presence in between the hands folded differently.  Tobacco chewing is rampant not only among the illiterates and low paid workers, but also the so called literates and well to do as well.  Shamshad came for painting the doors and windows of our Government accommodation today and his refusal for tea and snacks aroused curiosity in us.   On a detailed interaction he admitted the presence of tobacco in his mouth.  The Palliative mind setup we carry never allows us to remain quiet and so the first intervention of counseling.  Thanks to God, the guy not only spit out the chewed tobacco, but also destroyed the remaining packets with a promise not to touch tobacco in life.

A couple of hours later our encounter was with Munni Lal, the rickshaw puller in Okhla.  Unawares of our presence, he was merrily crushing tobacco while sitting in his rickshaw.  Again the first intervention followed with an offer to even monetarily compensate his thrown away packets of tobacco made his day to this extent of his considering us to be God sent for reforming him.  A packet of cool fruit juice further brought shining to his eyes and determination.    No one knows whether Shamshad and Munni Lal will stick to their promises or not, but let us discharge our Individual Social Responsibility.  Dr. Anjana Saxena and Linesh Marampattu supported in the intervention with Munni Lal.
Posted by DNipCare at 9:55 AM